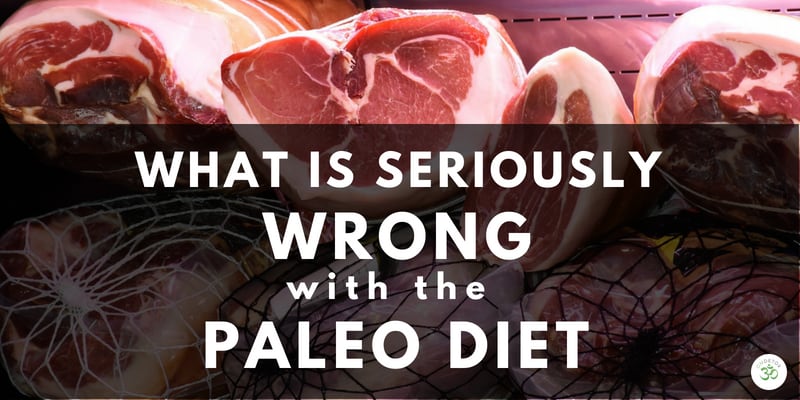 The Paleo diet sits on good intentions. It says that we should eat like a caveman if we wish to avoid being sick. The logic behind the paleo diet is that even if we have evolved since the Paleolithic era, our bodies are still the same and not meant to eat junk food. That actually sounds like a great idea!

If we would go back in time, we would find Mr. Caveman in his natural habitat, eating a natural diet of fruits, vegetables and a little bit of meat. No pizza, chocolate bars or ice cream.

The problem with the Paleo diet is the predominance of animal based protein. When in reality, meat was such a small portion of the paleo man’s diet. And unlike paleo believers may think, meat did not become a part of the diet because of our genetic makeup, it was solely for survival.

Our human ancestors, the Homo sapiens, were mainly herbivorous. Meat only appeared in the late period of the Paleolithic era. Some say that notable meat consumption started 400,000 years ago, when the first spear was found. Others will argue that a spear was not useful without a spear-thrower, which was invented around 17,000 years ago. Nonetheless, many agree that hunting techniques were truly implemented around 40,000 years ago.

At that time, humans started hunting because they had moved from their native land in Africa, relocating in colder climates in Europe and southeast Asia. Their diets which were predominantly herbivorous had to be replaced with what was available. Humans evolved to eat meat because it was necessary to survive. This was not because of our genetic makeup.

If caveman would have found pizza pockets, Oreo cookies or french fries just lying around the tundra, he would have eaten that too. Any source of calories would have been consumed!

Just because caveman ate meat does not mean that we should make it the center of our diet. Caveman did not have the life expectancy that the modern human has now. Caveman most likely died at a very young age from an animal attack or environmental factors. We will never have the chance to see the inside of their arteries. 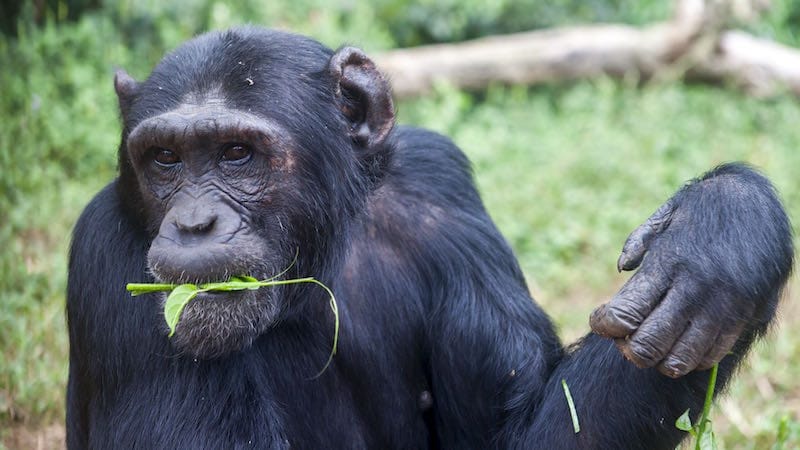 We know that our gut anatomy is very similar to the chimpanzees, who also share 99% of our DNA. Less than 1% of the Chimps diet is from meat. They eat leaves and fruits. Their diet is much closer to the actual Paleo diet than the one proposed by the present Paleo trend.

For years now, the scientific world has been showing the health benefits of avoiding animal protein. Most of our common diseases seem to be caused by our consumption of meat and other animal products, but most of us refuse to look into it. Why?

There is a giant industry that will continue to deny that animal protein is bad for us. Yes, I think it’s all about $$$. The information is there, available for everyone to see. But it will take time for the modern society to fully grasp this new concept.

Not everyone knows that both animals and plants are “complete proteins”. Many health professionals refer to plants as “low quality” proteins, because compared to animal foods, they contain a lower proportion of essential amino acids.

Having a higher proportion of amino acids does not necessarily mean that it is advantageous for our health. In reality, what society fails to understand is that too much protein is actually damaging to our bodies.

The lack of fibre

Plant protein comes with a load of fibre and antioxidants, while animal protein contains none! Whether you eat meat, eggs, fish or dairy, you are getting absolutely no fibre.

Being fibre deficient is so common in our days. People don’t realize it, but most of our digestive problems are caused by a diet that is lacking fibre, a meat-based diet. Paleo diet, ketogenic, low carb, Atkins, call it what you want. These are all diets centred on animal protein.

According to the USDA, 95% of Americans do not eat enough dietary fibre. The Institute of Medicine suggests that we consume 38 grams of fibre daily. In reality, people tend to eat only 15 grams of fibre per day. That is less than half the recommended amount.

Choosing the Paleo diet means eating lots of protein. This also means having a higher proportion of essential amino acids, which makes our bodies produce more IGF-1 (insulin-like growth factor-1). This hormone is responsible for cell division and cell growth. This sounds like something we want right?

Not so fast! The problem is that IGF-1 stimulates the growth of both healthy and cancer cells. This is why having high levels of IGF-1 in the body is associated with higher risks of developing cancer.

Every day, 50 billion of our cells die and 50 billion new cells are born. Unlike babies whose cells are continuously multiplying as they grow up, human adults need a balance when it comes to cell division. We don’t want to make more cells than we need. Growth is good when we are kids, but as an adult, it can lead to tumour growth.

When we are children, our IGF-1 levels are high so that we grow. As we age, those levels come down. And they should stay down.

Here is a video from Dr. Michael Greger explaining the mechanism of how eating a lot of animal protein makes our body produce more IGF-1.

TMAO (trimethylamine N-oxide) is a substance that can damage the inner lining of our blood vessels, provoke inflammation and the formation of cholesterol plaque. All of this increases our risks of developing heart disease.

TMAO is produced by our gut bacteria. When you eat animal protein, your gut bacteria metabolize the carnitine and choline it contains, and then produce trimethylamine, which is then oxidized in the liver to TMAO, a dangerous substance that circulates in our bloodstream.

So you may ask yourself now… what about plants? They contain a little bit of carnitine and choline. That is true. However, it seems that people who eat a plant-based diet don’t have the gut bacteria that produce TMAO. When you only eat plants, your body naturally selects the gut bacteria that are needed to digest fibre. No need for animal product-digesting bacteria.

But be aware. Even vegans can produce TMAO. If you consume energy drinks that contain carnitine or take carnitine supplements, you may need those TMAO-producing bacteria too!

Like TMAO, FGF23 is also harmful to our blood vessels. Studies show that high levels of FGF23 can lead to an abnormal enlargement of the cardiac ventricle, and is associated with heart attacks. So once again, we see that a high intake of protein like in the Paleo diet can be harmful in the long run.

Iron is an essential mineral that we must get from the food we eat. Too little iron can lead to anemia, but too much iron can promote cancer and other pathologies. So we have to be careful.

The Paleo diet contains a lot of animal protein and a lot of heme iron. This type of iron can accelerate the formation of carcinogens in our bodies, such as N-nitroso compounds. This has been associated with different kinds of gastrointestinal cancers. Heme iron can also convert less reactive oxidants into highly reactive free radicals, which can damage our DNA, proteins and membranes.

We can avoid the health problems linked to heme-iron by consuming plant foods instead of animal foods. Even if the bioavailability of non-heme iron in plants is lower than heme-iron, it is still possible to get adequate amounts of iron with a well-balanced vegan diet.

With iron, the expression “more is better” does not apply. Knowing that too much heme-iron causes DNA damage and oxidative stress, it is best to choose a non-heme iron source and avoid the possible complications from heme iron in animal foods.

The Paleo diet tends to have higher concentrations of sulfur-containing amino acids because of all the animal foods it contains. Too much acid forming minerals leads to acidosis. Our bodies’ way to neutralize this acidic state is to leach calcium from our bones.

Unfortunately, the calcium does not go back to our bones but is rather eliminated through urination.

Over time, diets that are high in animal protein like the Paleo diet can have a negative effect on our bone health. This could explain why populations with higher animal protein consumption have higher bone fracture rates.

All animals synthesize the cholesterol they need for their physiologic functions. As humans, we do not deviate from this rule. We do not need to consume any dietary cholesterol, since we can produce what we need.

The Paleo diet may be great in a way because it involves that you avoid processed foods. But it is still a diet that is loaded with cholesterol.

So once again, if the logic of the Paleo diet is to avoid diseases, it fails at preventing the development of our most common disease, heart disease. Avoiding all animal products, on the other hand, has been shown to prevent and even reverse atherosclerosis.

Should you worry about “protein quality”?

First, there is no need to worry about how much protein you eat. The average adult needs to consume 0.8 grams of protein per kg of body weight. So if you weigh 60 kg, you need to eat about 48 grams of protein daily. That is easily achievable without animal foods.

If you are getting enough calories from a plant-based diet composed of a variety of foods, there is no need to worry about protein. Eat vegetables, legumes, whole grains, nuts, seeds and fruits, and you will get all the protein you need.

Protein is made of chains of amino acids. Whether they are plant proteins or animal proteins, the amino acids are identical regardless of the source they come from. It’s the package they come from that matters.

The paleo diet may offer some short term benefits such as weight loss, but the health problems that it can lead to are way too serious.

Choosing a plant-based diet instead seem to be the best option if we want to reach optimal health.

So what do you make of all this? What diet are you on at the moment? Do you feel confused with the information you just read?

-Harvard T.H. Chan, School of Public Health: The Nutrition Source – Calcium and Milk: What’s Best for Your Bones and Health? 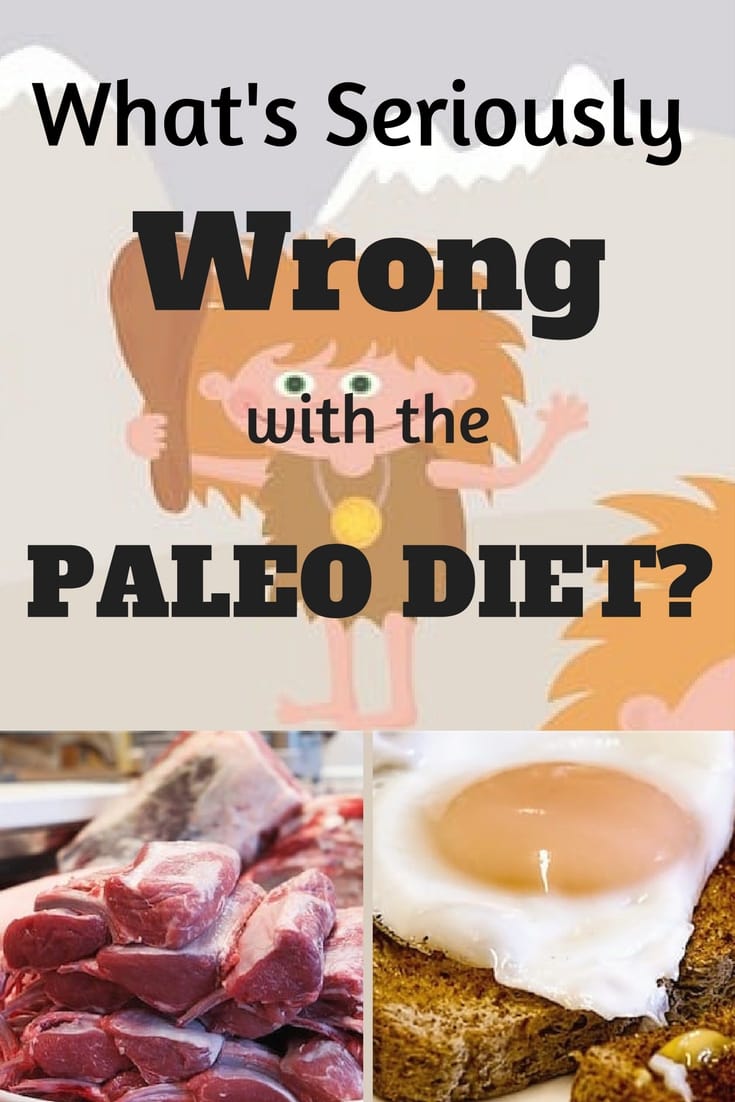 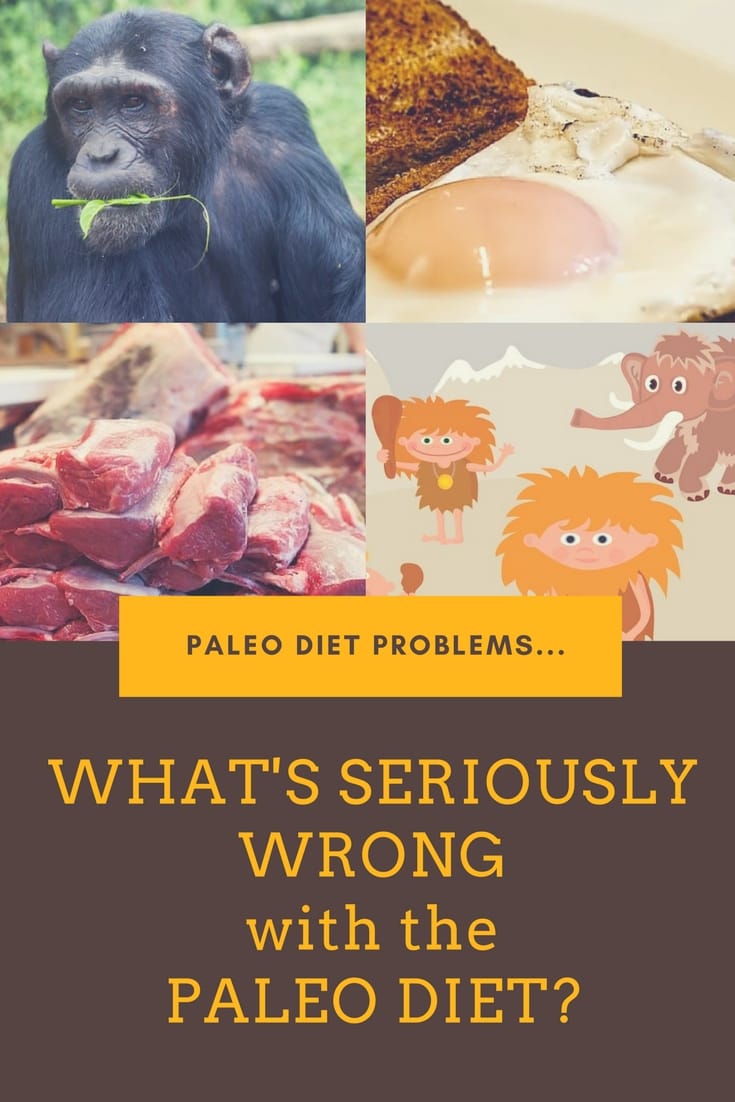