Why Cheese can be as Addictive as Drugs 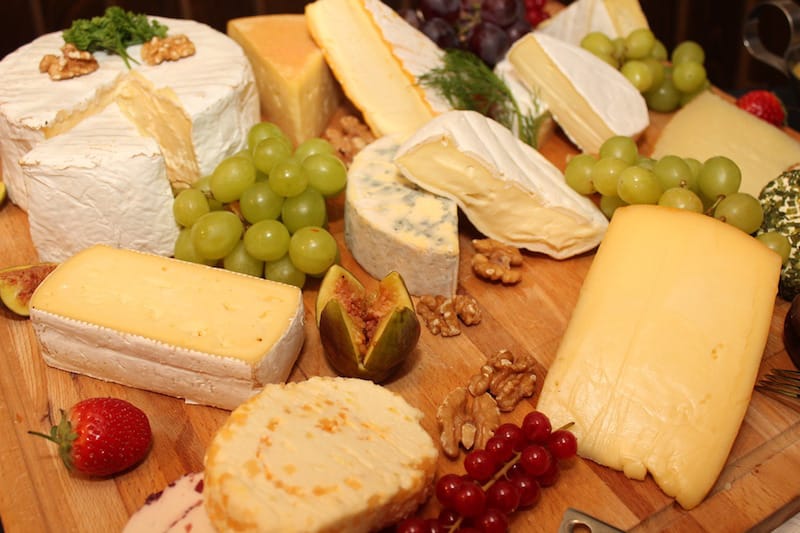 Which food do you find yourself the most addicted to? sweets? Salty snacks? Cheese? Fried foods? Pizza? Have you ever tried eating only one chip? Once you’ve had one, it’s not easy to control yourself and close the bag. They are just so irresistible and addictive.

When asked if they would ever go vegan, most people answer that they could never give up cheese. Not meat, not eggs. Cheese is the real addiction. It is part of our culture. We put cheese on almost everything. But is it healthy? 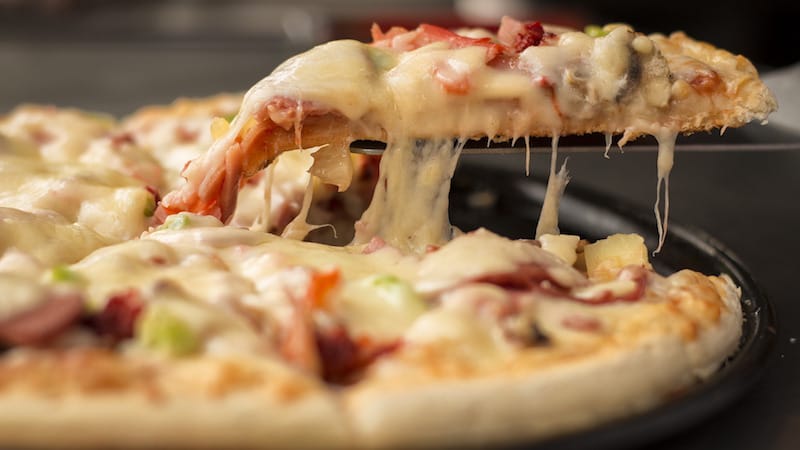 Which one do you love the most? Pizza Hut stuffed-crust pizza? Harvey’s mozzarella cheese burger? Burger King’s cheese sticks? I bet you like them all, and you are not alone!

Cheese consumption almost doubled in the US between 1950 and 1970, from 7 to 14 pounds per capita. In the 80s, we saw another increase of almost 50%. Since then, American’s taste for cheese has just increased year after year. In 2015, Americans were eating 35 pounds of cheese per year. In Europe, countries like France, Finland, Germany and Denmark eat about 57 pounds of cheese per capita per year. That is a lot of cheese! 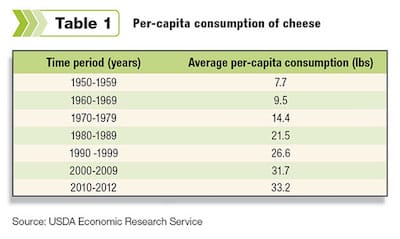 Why do people eat more cheese? People eat out more. Restaurants serve cheese on almost everything. Pizza, burgers, tacos, burritos, nachos, sandwiches, pasta, you name it. Everything has got cheese on it.

Drinking milk is not as popular now. People prefer to “eat” their milk. The interest for pizza has gone up over 600% since 1970. People don’t get milk delivery at their door anymore, but they certainly receive it in the form of pizza!

Cheese is so easy to eat. No cooking required. Just cut yourself a slice (or more) and eat it. It’s full of salt and fat, which is what people like to taste. And we are told that cheese is healthy, because it contains protein and calcium, 2 important nutrients.

You can walk into a store and get cheese grated, in chunks, sliced, in brick, sauces, in different flavours… The variety of cheese available is now very impressive.

If this continues, cheese consumption in the US could reach 40 pounds per capita in 2030. 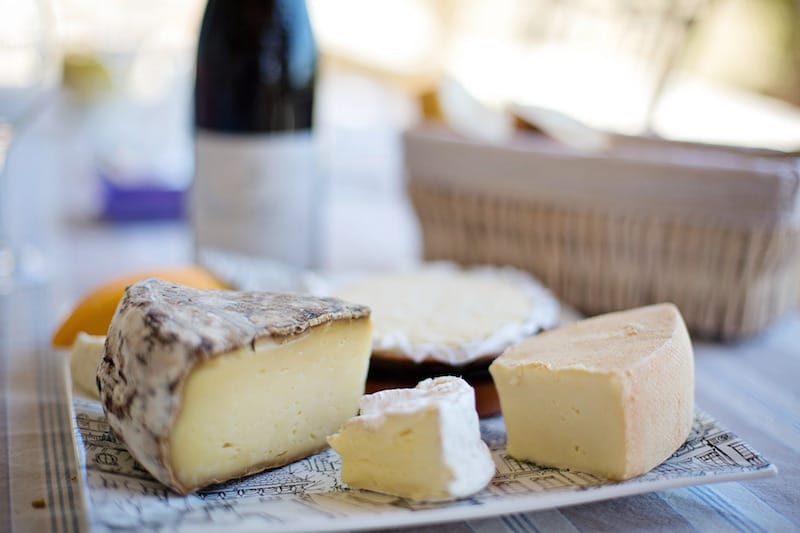 So, once again, why do we love cheese so much?

The answer is salt, fat and opiates.

Salt is habit-forming. We know it, and manufacturers know it. Adding salt to food products brings more money.

The human body needs salt and is programmed to crave it. According to the health guidelines, we need about 1.5 grams of sodium per day. This is achieved easily just by eating fresh fruits and vegetables. There is no need for all the added salt in the food we consume.

In the past, salt wasn’t as easy to find. When table salt was not invented yet, we got our sodium from the food that was available to us. In prehistoric times, our brain was set up to detect it and find it when needed.

Our tongue and brain are very sensitive to the taste of salt. Scientists think that our desire for salt partially comes from a chemical reaction in our brain when we consume it. Our reward center releases a feel-good neurotransmitter called dopamine when we eat salt. Dopamine is a reward for giving your body something it craves. 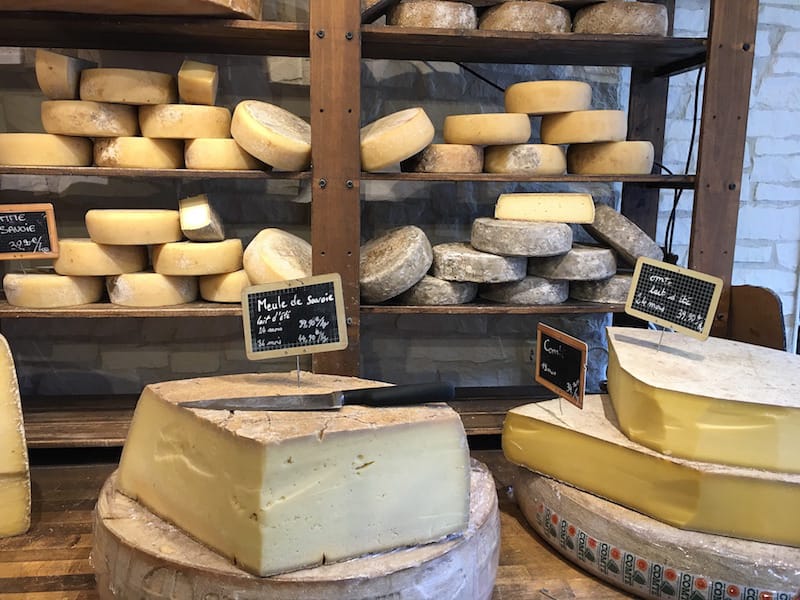 If you already have heart disease, then you need to avoid cheese at all costs if you plan on reversing your heart disease. A diet program without saturated fat is very important to follow. This type of program will also help with heart disease prevention.

You probably know that milk is high in protein, and so is cheese. The main protein found in dairy is called casein. It releases unusual types of protein fragments made of 4 to 7 amino acids, which are called casomorphins. Just like heroin, morphine and other narcotics, casomorphins attach to the same brain receptors and cause the same “feel-good” effect.

These opiates attach to the same brain receptors that heroin and morphine attach to. They are not strong enough to get you arrested, but they are just strong enough to keep you coming back for more, even while your thighs are expanding before your very eyes.’ 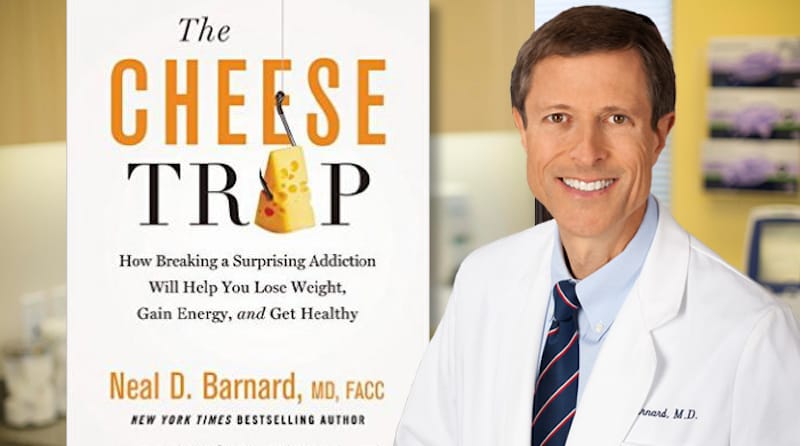 Why are there casein-derived morphine-like compounds in milk? Well, some scientists think that it’s to reward the baby after nursing, to make sure he comes back for more later. Nature thinks of everything. If a baby would not show interest in nursing, he would not get all the nutrients he needs to survive.

Look at a baby nursing intensively and all of a sudden, poof, he’s out. Opiates are calming and procure a sense of pleasure. It’s the release of dopamine that is responsible for this reward. That could explain why we feel so good after eating cheese, or why babies look so happy when they are nursing.

80% of the protein in milk is casein. There are about 7 grams of protein in a cup of milk, and 56 grams when converted into cheese. We can say that cheese is the most concentrated form of casein you can find.

In his book The Cheese Trap, Dr. Neal Barnard compared cheese to crack cocaine. Dairy crack! Just like the criminal organizations have found a way to turn cocaine into an even more addictive drug (crack), dairy producers have got you hooked on cheese like never before.

The dairy industry knows how to take advantage of our cheese cravings. They exploit it whenever they can. There is an extra cheese option for every dish at the restaurant. Cheese crust pizza, double cheese burger, extra cheese here, extra cheese there. 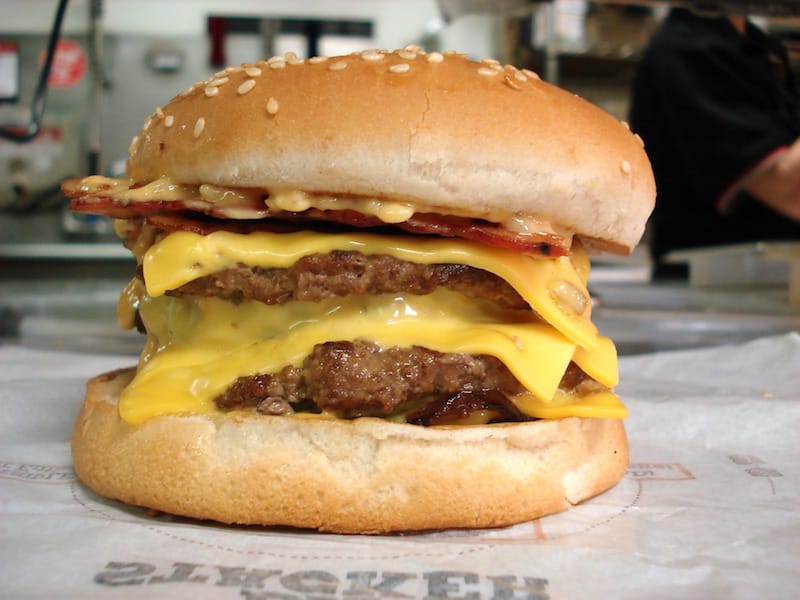 In 1983, the U.S. National Dairy board was created by the Dairy and Tobacco Adjustment Act. Since then, more than $1 billion on advertisement has been spent to solidify our beliefs that dairy “does the body good”.

Just like other animal products, dairy contains sex steroid hormones like estrogen. However, our modern and improved dairy cows are milked throughout pregnancy, when their sex hormones are really high.

Growth hormones are also a great concern when it comes to cancer. Nutrition experts from Harvard University have examined the link between the hormones in dairy and the growth of hormone-sensitive tumors.

Think about it. Cow’s milk is designed to allow a baby calf to gain a few hundred pounds in just a few months. As dairy consumers, we are exposed our whole lives to these growth factors, which may explain the connection between dairy consumption and certain cancers.

This could also explain why we are so fat… 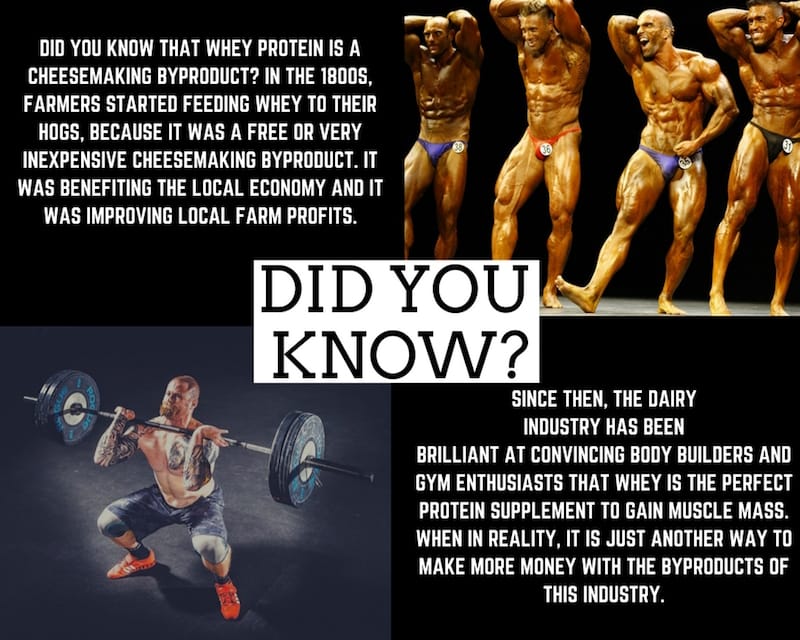 The concern about the link between dairy consumption and hormone-related cancers comes from population-scale data, like a 25 fold increase of prostate cancer in Japanese people since World War II. This coincided with an increased consumption of animal products, including dairy.

Of course, other factors could have caused this rise in cancer rates. So more research was done on that topic.

Researchers dripped organic cow’s milk in petri dishes containing human prostate cancer cells. They found that milk stimulated the growth of cancer cells by 30%. A 2015 meta-analysis concluded that a high consumption of milk and cheese may increase prostate cancer risk.

The fear of developing osteoporosis might just come from another marketing campaign of the dairy industry. Since childhood, we have been conditioned to believe that calcium is only available in dairy products, and that if we do not consume enough, our bones are going to break.

A meta-analysis of cow’s milk consumption studies showed no protection for hip fractures. A more recent study even suggested that milk may increase bone fracture rates! 100 000 men and women were followed for 2 decades to get to this conclusion.

Yes, there is calcium in cheese, just like there is protein in chicken and iron in beef. But That does not make cheese a healthy food choice. You also need to take into consideration the baggage that comes along with these foods. Saturated fat, trans fat, cholesterol, pollutants, etc.

Researchers also found that populations that drank more milk had higher rates of heart disease, of premature death and cancer.

In lab studies, scientists found that feeding galactose (a type of milk sugar) to the animals provoked premature aging, neuro-degeneration and cognitive disfunction.

People suffering from Parkinson’s disease have been found to elevated levels of pesticides in their bloodstreams, while diseases patients had them in their brain tissue, along with other pollutants like PCPs. Even if those chemicals were banned in the 90s, they are still found in our environment.

You can be exposed to these toxic chemicals by eating contaminated animals. People who eat a plant-based diet without dairy have lower levels of the PCBs linked to the Parkinson’s in their blood.

A 2014 meta-analysis of studies with more than 300 000 participants showed that dairy consumption was linked to an increased risk of Parkinson’s disease. Neurotoxin contamination may be to blame. Tetrahydroisoquinoline, a neurotoxic chemical, is used in lab studies to induce Parkinson’s in Primates. And this toxin is found primarily in… cheese.

Yes, cheese is tasty. But so are fruits and vegetables. Give yourself the time to adjust to a dairy free diet and you will see that your cravings will slowly go away. It takes about two months for our taste buds to change and appreciate new tastes. You should give it a try!

So now I turn to you.

Are you addicted to cheese? Do you eat cheese at every meal? Would you ever consider going dairy-free? 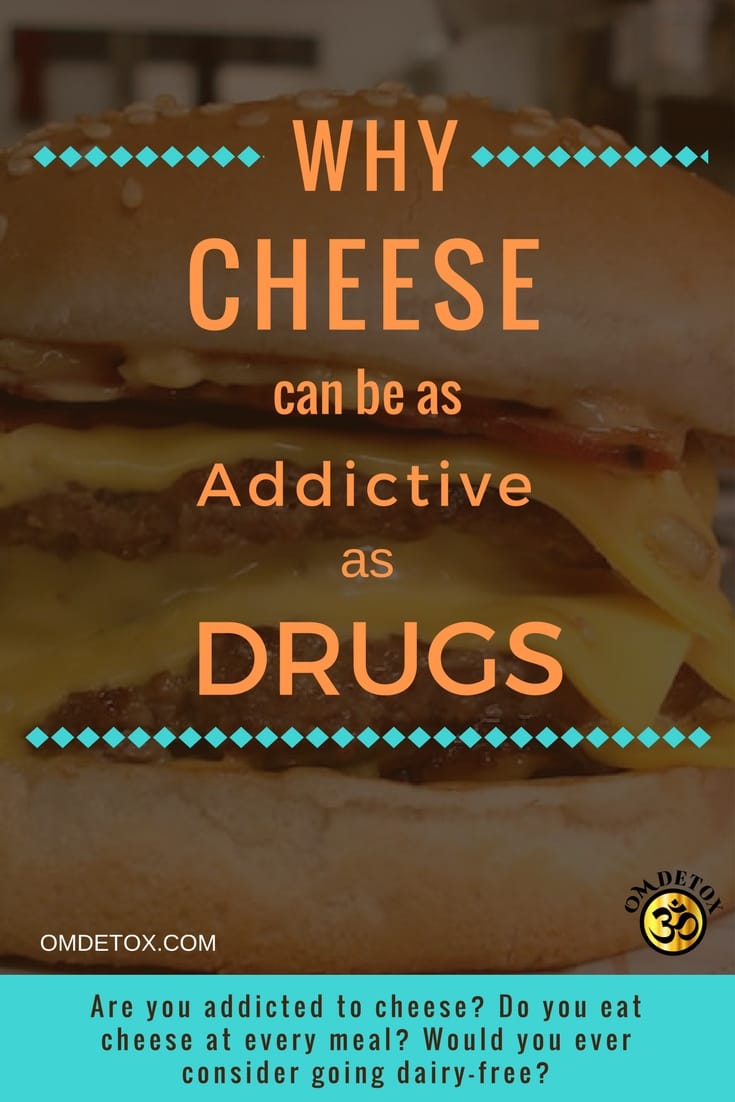